My motivations for planting crimson clover included weed suppression, nitrogen fixation, and curiosity about the aesthetics of a crimson field.  The garden plan included a large area (about 50 x 25 feet) allocated to zucchini and vine crops including watermelon, canteloupe, pumpkin, cucumber, and squash, planted in rows spaced between 4 and 6 feet.  To avoid continual weed warfare until these crops could establish themselves in late summer, I sowed crimson clover after the first tilling in late March.  In about a months time it had established a solid cover, reaching about 12 inches high.  Those weeds that emerged within the clover were removed by hand. 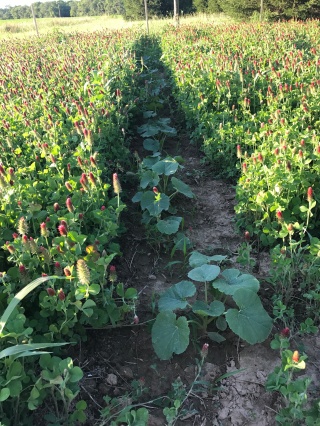 Vine crops were planted in mid May by tilling rows in the clover, and trimming back the clover with the mower to provide sufficient sunlight.  As a legume, crimson clover fixes (deposits) nitrogen from the atmosphere in small nodules on its roots.  My hope is this will fertilize the vine crops, which are heavy feeders.  Shown is a row of pumpkin plants in mid June.  These and the squash have grown well; the zucchini, canteloupe, and watermelon not so well.  Don’t know to what extent this is because of the clover, if at all.  The zucchini is a surprise, the canteloupe and watermelon not so much, as they are finicky.

The plan is to keep the clover trimmed until the vines establish a ground cover.  Then, as an annual, it will winter kill and (hopefully) protect the soil until Spring.  So far, the crimson clover appears to be working out.